Diana Anderson-Tyler created a book bundle giveaway that I ended up winning! I was so excited that I got to receive three Greek mythology inspired novels. I couldn’t believe it when I recieved them in the mail. I am so so thankful to Diana for sending these my way!

Here they are in all their gorgeous glory:

Moonbow: The Colors of Iris by Diana Anderson-Tyler

A teenaged girl with an ageless power.

A rebellion that begs her to use it for vengeance.

A follower in the sky that she cannot outrun.

And a choice that will change her life.
Set in Petros, an ancient Greece-like land of mesmerizing myths and monsters, MOONBOW follows Iris, a despairing young woman who has spent three agonizing years as a slave to Acheron, the sadistic officer responsible for burning her brother alive. But when Iris’s own life is threatened at the bronze tip of an outlaw’s blade, she receives an astonishing, long-awaited power, and with it, the confidence and weapon she needs to fulfill her greatest desire: avenge her brother, or die trying. If only the Moonbow, that unavoidable symbol of redemption shining in the sky, would let her be…
Armed with a warrior’s dagger and an explosive new power, Iris finds herself at the headquarters of the zealots who call themselves the Soukinoi after the sacred amber scrolls they house inside their temple. Their leader is Diokles, a charismatic, godlike man who captivates Iris with his passion and vision to liberate all of Petros from its oppressors, and most importantly, train her skill and lead her to Acheron.
Overcome by her obsession, Iris now calls herself Hunter, and will stop at nothing, not even the killing of innocents, to reach her goal. But on the day she reunites with Tycho, a mysterious former Soukinoi who has been taken prisoner by Diokles and sentenced to death, Iris can’t fight the urge to speak up for his life. Now, both she and Tycho are on Diokles’s blacklist, and only a single misstep stands between them and a fatal encounter with the Gryphon, the gigantic, flesh-eating bird Iris thought existed only in myth.
After Tycho’s escape, Iris knows her time is short. While being escorted back to Diokles, she receives alarming information about her brother’s death and finds out that Diokles’s plans are far more sinister than they seem. Wrestling with strong feelings of guilt and disillusionment, and unable to dispute the supernatural happenings around and within her, Iris must decide whether the Moonbow truly does hold the answers she’s searching for…

The Song of Achilles by Madeline Miller 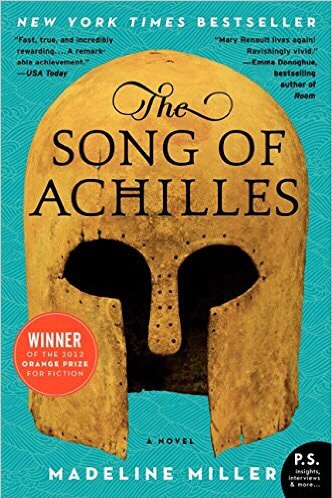 Greece in the age of heroes. Patroclus, an awkward young prince, has been exiled to the court of King Peleus and his perfect son Achilles. Despite their difference, Achilles befriends the shamed prince, and as they grow into young men skilled in the arts of war and medicine, their bond blossoms into something deeper – despite the displeasure of Achilles’ mother Thetis, a cruel sea goddess.
But when word comes that Helen of Sparta has been kidnapped, Achilles must go to war in distant Troy and fulfill his destiny. Torn between love and fear for his friend, Patroclus goes with him, little knowing that the years that follow will test everything they hold dear.

Till We Have Faces by C.S. Lewis

well why the gods do not speak to us openly, nor let us answer . . . Why should they hear the babble that we think we mean? How can they meet us face to face till we have faces?”
Haunted by the myth of Cupid and Psyche throughout his life, C.S. Lewis wrote this, his last, extraordinary novel, to retell their story through the gaze of Psyche’s sister, Orual. Disfigured and embittered, Orual loves her younger sister to a fault and suffers deeply when she is sent away to Cupid, the God of the Mountain. Psyche is forbidden to look upon the god’s face, but is persuaded by her sister to do so; she is banished for her betrayal. Orual is left alone to grow in power but never in love, to wonder at the silence of the gods. Only at the end of her life, in visions of her lost beloved sister, will she hear an answer.

What are your favorite Greek Myths? Have you read any of these books? If you have, let me know what you thought of them.