This month I’ve gotten ahold of a few lovely books that I am dying to share with your guys: (the irony of this has me shaking my head, you’ll see why in a little bit) Anyway, on to the books!

The Dead Inside by Cydy Etler

For readers of Girl Interrupted and Tweak, Cyndy Etler’s gripping memoir gives readers a glimpse into the harrowing reality of her sixteen months in the notorious “tough love” program the ACLU called “a concentration camp for throwaway kids.”
I never was a badass. Or a slut, a junkie, a stoner, like they told me I was. I was just a kid looking for something good, something that felt like love. I was a wannabe in a Levi’s jean jacket. Anybody could see that. Except my mother. And the professionals at Straight.
From the outside, Straight Inc. was a drug rehab. But on the inside it was…well, it was something else.
All Cyndy wanted was to be loved and accepted. By age fourteen, she had escaped from her violent home, only to be reported as a runaway and sent to a “drug rehabilitation” facility that changed her world.
To the public, Straight Inc. was a place of recovery. But behind closed doors, the program used bizarre and intimidating methods to “treat” its patients. In her raw and fearless memoir, Cyndy Etler recounts her sixteen months in the living nightmare that Straight Inc. considered “healing.”

Cory Taylor is one of Australia’s celebrated novelists, the author of the brilliant Me and Mr Booker (winner of the Commonwealth Writers Prize, Pacific region), and My Beautiful Enemy (shortlisted for the Miles Franklin Award).
At the age of sixty, she is dying of melanoma-related brain cancer. Her illness is no longer treatable. As she tells us in her remarkable last book, Dying: A Memoir, she now weighs less than her neighbour’s retriever.
Written in the space of a few weeks, in a tremendous creative surge, this powerful and beautifully written book is a clear-eyed account of what dying has taught Cory: she describes the tangle of her feelings, she reflects on her life, and she remembers the lives and deaths of her parents. She tells us why she would like to be able to choose the circumstances of her own death.
Dying: A Memoir is a breathtaking book about vulnerability and strength, courage and humility, anger and acceptance. It is a deeply affecting meditation on dying, but it is also a funny and wise tribute to life.

I open my eyes to darkness. Total darkness. I hear my own breathing, but nothing else. I lift my head…it thumps against something solid and unmoving. There is a board right in front of my face. No, not a board…a lid.
A teenage girl awakens to find herself trapped in a coffin. She has no idea who she is, where she is, or how she got there. Fighting her way free brings little relief—she discovers only a room lined with caskets and a handful of equally mystified survivors. Beyond their room lies a corridor filled with bones and dust, but no people…and no answers.
She knows only one thing about herself—her name, M. Savage, which was engraved on the foot of her coffin—yet she finds herself in charge. She is not the biggest among them, or the boldest, but for some reason the others trust her. Now, if they’re to have any chance, she must get them to trust one another.
Whatever the truth is, she is determined to find it and confront it. If she has to lead, she will make sure they survive. Maybe there’s a way out, a rational explanation, and a fighting chance against the dangers to come. Or maybe a reality they cannot comprehend lies just beyond the next turn.

A Court of Thorns and Roses by Sarah J. Maas (ebook)

When nineteen-year-old huntress Feyre kills a wolf in the woods, a beast-like creature arrives to demand retribution for it. Dragged to a treacherous magical land she only knows about from legends, Feyre discovers that her captor is not an animal, but Tamlin—one of the lethal, immortal faeries who once ruled their world.
As she dwells on his estate, her feelings for Tamlin transform from icy hostility into a fiery passion that burns through every lie and warning she’s been told about the beautiful, dangerous world of the Fae. But an ancient, wicked shadow grows over the faerie lands, and Feyre must find a way to stop it . . . or doom Tamlin—and his world—forever.

The founder of Nasty Gal offers a sassy and irreverent manifesto for ambitious young women
At seventeen, Sophia Amoruso decided to forgo continuing education to pursue a life of hitchhiking, dumpster diving, and petty thievery. Now, at twenty-nine, she is the Founder, CEO, and Creative Director of Nasty Gal, a $100+ million e-tailer that draws A-list publicity and rabid fans for its leading-edge fashion and provocative online persona. Her story is extraordinary—and only part of the appeal of #GIRLBOSS.
This aspirational book doesn’t patronize young women the way many business experts do. Amoruso shows readers how to channel their passion and hard work, while keeping their insecurities from getting in the way. She offers straight talk about making your voice heard and doing meaningful work.
She’s proof that you can be a huge success without giving up your spirit of adventure or distinctive style. As she writes, “I have three pieces of advice I want you to remember: Don’t ever grow up. Don’t become a bore. Don’t let The Man get to you. OK? Cool. Then let’s do this.”

The first book in Alyson Noël’s extraordinary new Immortals series. Enter an enchanting new world, where true love never dies…
After a horrible accident claims the lives of her family, sixteen-year-old Ever Bloom can see people’s auras, hear their thoughts, and know someone’s entire life story by touching them. Going out of her way to avoid human contact to suppress her abilities, she has been branded a freak at her new high school — but everything changes when she meets Damen Auguste.
Damen is gorgeous, exotic and wealthy. He’s the only one who can silence the noise and random energy in her head – wielding a magic so intense, it’s as though he can peer straight into her soul. As Ever is drawn deeper into his enticing world of secrets and mystery, she’s left with more questions than answers. And she has no idea just who he really is – or what he is. The only thing she knows to be true is that she’s falling deeply and helplessly in love with him. 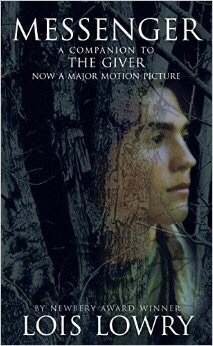 Messenger is the masterful third novel in the Giver Quartet, which began with the dystopian bestseller The Giver, now a major motion picture.

Matty has lived in Village and flourished under the guidance of Seer, a blind man known for his special sight. Village once welcomed newcomers, but something sinister has seeped into Village and the people have voted to close it to outsiders. Matty has been invaluable as a messenger. Now he must risk everything to make one last journey through the treacherous forest with his only weapon, a power he unexpectedly discovers within himself.

That is all! Thanks for reading! Let me know if you’ve read any of these books down in the comments! I’m curious to hear your thoughts.