It’s Wednesday, and you know that means it is time to discuss the books we are currently reading!

The book I most recently finished: 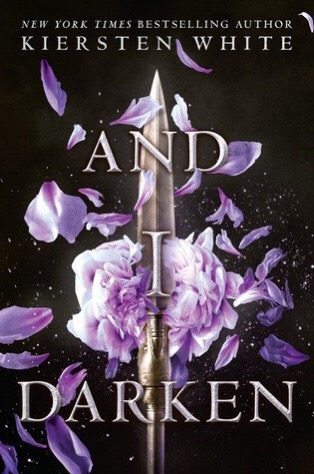 No one expects a princess to be brutal. And Lada Dragwlya likes it that way. Ever since she and her gentle younger brother, Radu, were wrenched from their homeland of Wallachia and abandoned by their father to be raised in the Ottoman courts, Lada has known that being ruthless is the key to survival. She and Radu are doomed to act as pawns in a vicious game, an unseen sword hovering over their every move. For the lineage that makes them special also makes them targets.
Lada despises the Ottomans and bides her time, planning her vengeance for the day when she can return to Wallachia and claim her birthright. Radu longs only for a place where he feels safe. And when they meet Mehmed, the defiant and lonely son of the sultan, Radu feels that he’s made a true friend—and Lada wonders if she’s finally found someone worthy of her passion.
But Mehmed is heir to the very empire that Lada has sworn to fight against—and that Radu now considers home. Together, Lada, Radu, and Mehmed form a toxic triangle that strains the bonds of love and loyalty to the breaking point.

I rated this book 5 stars and I absolutely loved it! You can take a look at my review here!

Books I am currently reading:

The more I touch someone, the more I can see and understand, and the more I think I can help. But that’s my mistake. I can’t help. You can’t fix people like you can solve a math problem.
Math genius. Freak of nature. Loner.
Eva Walker has literally one friend—if you don’t count her quadruplet three-year-old-siblings—and it’s not even because she’s a math nerd. No, Eva is a loner out of necessity, because everyone and everything around her is an emotional minefield. All she has to do is touch someone, or their shirt, or their cell phone, and she can read all their secrets, their insecurities, their fears.
Sure, Eva’s “gift” comes in handy when she’s tutoring math and she can learn where people are struggling just by touching their calculators. For the most part, though, it’s safer to keep her hands to herself. Until she meets six-foot-three, cute-without-trying Zenn Bennett, who makes that nearly impossible.
Zenn’s jacket gives Eva such a dark and violent vision that you’d think not touching him would be easy. But sometimes you have to take a risk…

Family – the most important thing in the world, right? If it’s your own, maybe. But if it’s the family of the incredibly powerful, incredibly alluring businessman with whom you’ve been conducting a secret office affair, and they don’t yet know about the affair, things are a little bit different.
Life is about to get real for Lilly Linton. All those stolen moments behind closed doors, those secret kisses and whispered words are about to catch up with her. As she and her boss, business-magnate Rikkard Ambrose travel north to his parents’ palatial estate, she is about to discover: does she have the strength to step out of the shadows and change her fate forever?

The Wrath and The Dawn

One Life to One Dawn.
In a land ruled by a murderous boy-king, each dawn brings heartache to a new family. Khalid, the eighteen-year-old Caliph of Khorasan, is a monster. Each night he takes a new bride only to have a silk cord wrapped around her throat come morning. When sixteen-year-old Shahrzad’s dearest friend falls victim to Khalid, Shahrzad vows vengeance and volunteers to be his next bride. Shahrzad is determined not only to stay alive, but to end the caliph’s reign of terror once and for all.
Night after night, Shahrzad beguiles Khalid, weaving stories that enchant, ensuring her survival, though she knows each dawn could be her last. But something she never expected begins to happen: Khalid is nothing like what she’d imagined him to be. This monster is a boy with a tormented heart. Incredibly, Shahrzad finds herself falling in love. How is this possible? It’s an unforgivable betrayal. Still, Shahrzad has come to understand all is not as it seems in this palace of marble and stone. She resolves to uncover whatever secrets lurk and, despite her love, be ready to take Khalid’s life as retribution for the many lives he’s stolen. Can their love survive this world of stories and secrets?

Lada Dracul has no allies. No throne. All she has is what she’s always had: herself. After failing to secure the Wallachian throne, Lada is out to punish anyone who dares to cross her blood-strewn path. Filled with a white-hot rage, she storms the countryside with her men, accompanied by her childhood friend Bogdan, terrorizing the land. But brute force isn’t getting Lada what she wants. And thinking of Mehmed brings little comfort to her thorny heart. There’s no time to wonder whether he still thinks about her, even loves her. She left him before he could leave her.
What Lada needs is her younger brother Radu’s subtlety and skill. But Mehmed has sent him to Constantinople—and it’s no diplomatic mission. Mehmed wants control of the city, and Radu has earned an unwanted place as a double-crossing spy behind enemy lines. Radu longs for his sister’s fierce confidence—but for the first time in his life, he rejects her unexpected plea for help. Torn between loyalties to faith, to the Ottomans, and to Mehmed, he knows he owes Lada nothing. If she dies, he could never forgive himself—but if he fails in Constantinople, will Mehmed ever forgive him?
As nations fall around them, the Dracul siblings must decide: what will they sacrifice to fulfill their destinies? Empires will topple, thrones will be won . . . and souls will be lost.

I have three months left to call Katie my older sister. Then the gap will close and I will pass her. I will get older. But Katie will always be fifteen, eleven months and twenty-one days old.
Hannah’s world is in pieces and she doesn’t need the school counsellor to tell her she has deep-seated psychological issues. With a seriously depressed mum, an injured dad and a dead sister, who wouldn’t have problems?
Hannah should feel terrible but for the first time in ages, she feels a glimmer of hope and isn’t afraid anymore. Is it because the elusive Josh is taking an interest in her? Or does it run deeper than that?
In a family torn apart by grief and guilt, one girl’s struggle to come to terms with years of torment shows just how long old wounds can take to heal.

A Very New Day is about a boy with Cerebral palsy, who goes to go regular school for the first time in junior high and uses Morse code to write. Rich Trout is unable to use his hands. Instead, he drives his electric wheelchair and writes in Morse code with his head. Rich doubts that he belongs in regular school after being isolated to special education classes only.

He is inspired by Mrs. Tilley, his English teacher, who treats him as a regular student and shows Rich that anything is possible. Rich has one dream, to be a writer. Mrs. Tilley introduces Rich to an author friend of hers, who also has Cerebral palsy, serving as an inspiration and role model.

Book I intend to start next:

Seventeen-year-old Max has always felt like an outsider. When the agonizing apocalyptic visions begin, he decides suicide is his only escape. He soon finds himself in an institution under the guidance of a therapist who sees something exceptional in him. Just as he begins to leave the hallucinations behind, Max discovers the visions weren’t just in his head.
There are three others who have shared those same thoughts and they’ve been searching for Max. Like him, they are something more than human. Each of them possesses certain abilities, which they’re going to need when a covert military group begins hunting them down.
As the danger escalates, Max doesn’t know which side to trust. But in the end, his choice will decide the fate of both species.

Thanks for reading! I know I read far too many books at once, but that is simply the curse of being me. What are you currently reading? Let me know down in the comments!

10 thoughts on “What are you reading? Wednesday!”