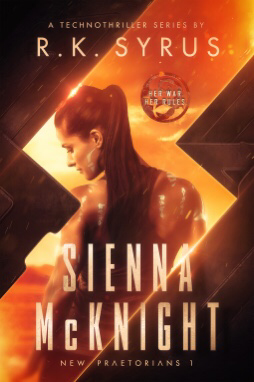 Received: Netgalley provided an e-arc in exchange for an honest review

In the near future, soldier Sienna McKnight seeks revenge on her terrorist cousin. They both gain extraordinary powers during the series and engage in an epic battle over the fate of humanity and a unique orphan girl.

Sienna McKnight’s odyssey began 23 years ago. She was born a nameless half breed on an overseas military base. With her first breaths she tenaciously clung to life on the edge of the Wandering Desert in a land now called Khorasan.

Adopted by a military family and raised in America, she never forgot her origins. How could she? Her fate is spelled out in a rough pattern of runes cut across her body in a language of unearthly hate.  Her destiny threatens to consume her. Through it all, Sienna must find a way to protect what is most precious.

Opening Sentence: “That sunny morning near her hometown she battled a ravenous beast with the help of a monster, the one that abides in her still.”

Sienna McKnight was a novel whose premise was enough to interest me, but a storyline that I just could not connect with. To tell the truth all the way at the end I was still confused about what was going on and the whole thing left me pretty unsatisfied.

I came into this novel expecting a sort of superhero action type story with a strong heroine that I could really connect to, and while the heroine was truly strong I never connected with her and the action while there was a little lack-luster for me. This novel being the first of many in a series, I was hoping that I would really love it so that I could enjoy the next books when they came out, but I didn’t really enjoy this all that much and I felt like there was a lot missing to the story.

Most of all I think that the writing was too jammed with seemingly random sayings and unnecessary words that it was almost impossible for me to see what the actual story was about and what the purpose of any of it was. There were still parts and sections that were really cool to read. These parts appearing making me have bursts of interest in the story, but they were so few and far in between that I just felt so lost while reading.

Sienna McKnight was a book that I really wanted to enjoy, but it didn’t quite make its mark.

Thanks so much for reading! Let me know your thoughts in the comments below.