To Kill a Kingdom by Alexandra Christo 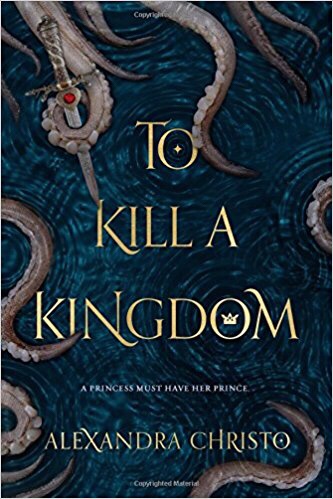 Cover Rating: 7.5/10 I really like this cover. It’s really pretty and I like that the octopi legs remind you of the Sea Queen. It’s an elegant cover and it attracted me to this book.

Received: Netgalley provided an e-arc in exchange for an honest review.

Princess Lira is siren royalty and the most lethal of them all. With the hearts of seventeen princes in her collection, she is revered across the sea. Until a twist of fate forces her to kill one of her own. To punish her daughter, the Sea Queen transforms Lira into the one thing they loathe most–a human. Robbed of her song, Lira has until the winter solstice to deliver Prince Elian’s heart to the Sea Queen or remain a human forever.

The ocean is the only place Prince Elian calls home, even though he is heir to the most powerful kingdom in the world. Hunting sirens is more than an unsavory hobby–it’s his calling. When he rescues a drowning woman in the ocean, she’s more than what she appears. She promises to help him find the key to destroying all of sirenkind for good–But can he trust her? And just how many deals will Elian have to barter to eliminate mankind’s greatest enemy?

Opening Sentence: “I have a heart for every year I’ve been alive.”

To Kill A Kingdom swept the ya scene in a building phenomenon. Raving reviews poured in bringing me to the decision that I had to read this book. That turned out to be a wonderful decision as I enjoyed this book immensely! Dark Sirens, budding magic, and hate to love relationships make me happy. This is a really great fantasy read.

A dark spin on a familiar tale. The little mermaid is one of the most beloved fairytales of all. Seeing a retelling take that story and make it it’s own was a lot of fun for me. I liked seeing the little nods to the original storyline here and there.

Actual reasons for why the sirens act the way they do. I think it was really smart of the author to make sirens cruelty to be a part of their culture. It’s even praised among them! They are not necessarily bad just to be bad, but because it is what they know and what is expected of them as productive members of their people.

The descriptions of the kingdoms. I really like that even though the majority of the book is on the sea I had a sense of what other kingdoms were like based on their waters. It was like their character was defined by the surrounding sea.

Shipping on an actual ship. I mean as a fan girl I love seeing my ships set sail on literal ships. Nothing makes me happier.

The sea queen is a gorgeous Ursula. I’ve always thought it was a tragedy that Disney made Ursula ugly. Gorgeous villains and villains who are just regular people can often be more interesting. Although even the original Ursula didn’t hesitate to let her fab flag fly.

Whenever I am looking for a fun fast paced read I’m turning to this book. Retelling make for things of beauty more often then not.

Alexandra Christo decided to write books when she was four and her teacher told her she couldn’t be a fairy. She has a BA in Creative Writing and works as a copywriter in London, both of which make her sound more grown up than she feels. When she’s not busy making up stories, she can be found buying far too many cushions and organizing food crawls all over the city.

Alexandra currently lives in Hertfordshire with an abundance of cacti (because they’re the only plants she can keep alive).

Thanks for reading! Let me know your thoughts down in the comments below! What do you think of To Kill a Kingdom?

27 thoughts on “To Kill A Kingdom: A Review”