Nothing But Sky by Amy Trueblood 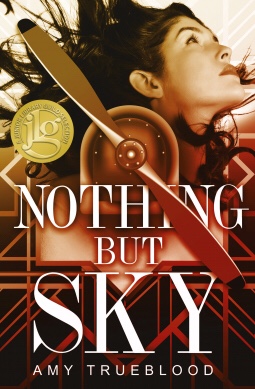 Cover Rating: 2.5/10 I don’t like this cover. Especially because the photoshop is to where I can really tell it was photoshop. Plus I think having a models face here was a poor decision. It could have been a really pretty 1920’s aviation inspired cover.

Received: Netgalley provided an e-arc in exchange for an honest review.

“Trueblood’s action-packed first novel explores the post-World War I époque with visceral period detail, and Grace’s ambition carries the story about fighting for one’s dreams, seeking stability in some form, and a team becoming a family.” —Publishers Weekly

Grace Lafferty only feels alive when she’s dangling 500 feet above ground. As a post-World War I wing walker, Grace is determined to get to the World Aviation Expo, proving her team’s worth against flashier competitors and earning a coveted Hollywood contract.

No one’s ever questioned Grace’s ambition until Henry Patton, a mechanic with plenty of scars from the battlefield, joins her barnstorming team. With each new death-defying trick, Henry pushes Grace to consider her reasons for being a daredevil. Annoyed with Henry’s constant interference, and her growing attraction to him, Grace continues to test the powers of the sky.

After one of her risky maneuvers saves a pilot’s life, a Hollywood studio offers Grace a chance to perform at the Expo. She jumps at the opportunity to secure her future. But when a stunt goes wrong, Grace must decide whether Henry, and her life, are worth risking for one final trick.

Nothing But Sky was a fun feminist read that I for some reason had a hard time putting down. I had to know what was next with this book so I must say the author did her job and did it well!

The Barnstorming! I loved seeing a book featuring one of the coolest and most dangerous jobs ever! Women of barnstorming are the most badass women you could ever see and it was super cool to read about.

The Love Story. You’re going to read later on the small exception to this, but I really did like the love story this told. I liked that Henry came back from war with PTSD. Something that ends up bringing Grace and him together in a more natural way. There were some sweet moments in there and I loved all of them.

The Twist. In a book like this I was not expecting a twist like the one I got. It threw me for a loop and I couldn’t help but thinking “No way! No way! No Way!!!” Over and over again.

Her friends. Grace has two friends in this novel and their story together was actually one of the parts of this story I enjoyed the most. I loved that they kept trying to style Grace and the fact that Grace kept rejecting it to be herself.

Feminist Grace. I enjoyed Grace as a main character. She believed in herself every step of the way. No matter who was telling her to be careful or that she couldn’t do something she continued to persist. She was brilliant!

What I Did Not Enjoy:

Henry was a jerk at the beginning. I did not like seeing that for a long while Henry was not a guy that I would have liked to see as a love interest. He came off as a bit cocky and in some ways put down Grace and even though that changes later I still didn’t like seeing it happen in the beginning. (This is still a 4 star read this was the one thing I just couldn’t let go of).

I’m Amy Trueblood and I write Young Adult and Adult fiction. I grew up in Southern California and Arizona. After graduating from college with a degree in journalism, I lived in Los Angeles and worked as an NBC page before returning to Arizona to start a career in advertising.

My wild life has allowed me to live in many places including Nashville (for six years), and it’s true what they say, it’s very easy to pick up the accent. While living in Music City, I worked for Ingram Book Group and fell in love with the world of publishing and writing after reading an ARC (advanced reading copy) of Harry Potter and the Prisoner of Azkaban. Shortly thereafter, I started writing my first Young Adult novel and I haven’t stopped writing since!

7 thoughts on “Nothing But Sky: A Review”